A Family Is a House 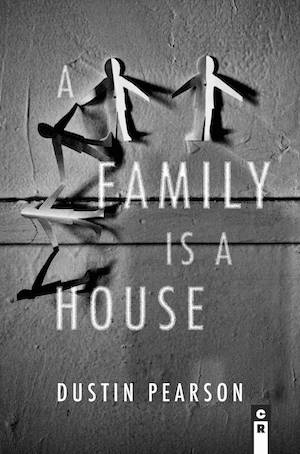 Pearson’s debut introduced us to a master transmogrifier. In this surreal follow-up collection he investigates the architectural implications of inheritance—how the human body houses the violence of its forebears. A Family Is a House is a blueprint, a guide to the logical structures and spaces we build in our minds: sometimes to keep our secrets in, sometimes to keep the horrors out. Pearson offers us an answer to the toughest question: what happens when our secrets are our horrors? We build, compartmentalize, and quarantine. We refract, reflect, demolish, and burn. This is a book about the oldest partition—that thin wall between the dark and the light. This is a book about bravery, about severing oneself from a lineage of abuse. When the hands that feed us also beat us, we must beat them back with the gifts we’ve been given. Through Pearson, we relearn that language can be weaponized into a kind of magic that saves us.

In Dustin Pearson’s new book a sibling is said to have a tail so long it can be wrapped twice around the house, and a mother’s mouth is likened to a stove that her children stoke with wood. One might want to say these images are surreal, but the Pearson speaker speaks strange things so believably that there is no way to take them as anything other than the literal truth. Here, figuration is no excuse and no escape. I think of the fearlessness of Sharon Olds, and I think of the biological horror of David Cronenberg, and I think it’s all Dustin Pearson, laconic but lush, straight-faced in the panic.

Dear reader, you will see the ways that nothing works in the house this family builds, this house of absence and abuse, where the brothers hold themselves together as they “take / their spreading bruises and scabs outside / and try to make nothing from them.” In Pearson’s poems, the boys—knowing nothing else—don’t especially recognize their pain, speak lightly of their fears, and endure with devastating calm the “blind slither to nowhere” that is their father’s gentlest path. Pearson’s boys suffer and survive in real and surreal ways: despite everything, they “follow [their] dad everywhere,” and then they find that their father “follow[s] them into mirrors.” The poems reckon with both masculinity and the imagination, the way the latter might intensify our fears, might also lift us through and beyond them.

– Sally Ball, author of Wreck Me

In Dustin Pearson’s A Family Is a House we are gifted with a new surreal pantheon dissecting the mythology that arises from family. A brother’s tail that grows uncontrolled across a neighborhood. A mother who becomes a furnace, burning everything in her path. A father who leaves drippings of flesh for his children. In this stunning collection the violence and terror are palpable – we’ve known it in our homes, we know it in our nation. This book is an incredible, visceral experience from one of the most striking and necessary voices in poetry today.